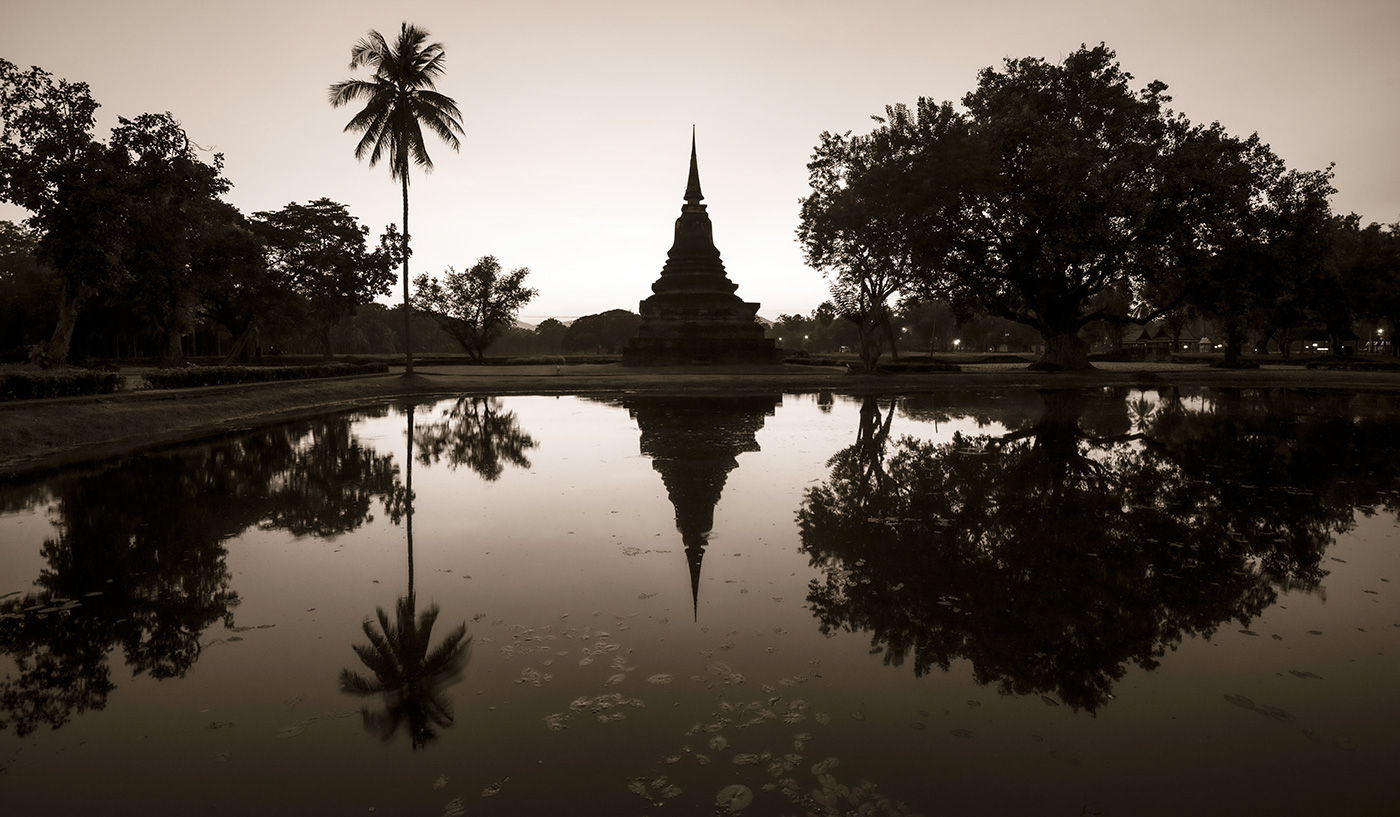 The Dawn of Happiness – Sukhothai, Thailand

Old Sukhothai is one of Thailand’s most magical world heritage sites.  The historical park resides in Northern Thailand, about 200 miles south of Chang Mai.  When Rob and I ride our bicycles to the ruins, it is late October and it feels like we have this ancient kingdom of Siam all to ourselves.  Very few people are here, it is perfect for Rob’s photo shoot.

An air of serenity resonates from the place.  It is a landscape of jewel tones:  emerald green palms, a sapphire sky, hot pink lotuses.  The air is warm and soft.  White clouds hover above the Buddhas and temples like umbrellas.

Sukhothai means “Dawn of Happiness” and when I gaze upon a towering carved Buddha, at peace with himself and the world, happiness blooms within me.  There is something about being surrounded by images of serenity, humans balanced in perfect equipoise, that soothes the soul.  This is what I especially love about Northern Thailand—the temples and Buddhas tucked around corners, hidden behind walls, the bright orange robes of Thai monks calmly drifting down a street.  It creates a resonance of enlightenment.

The Sukhothai Kingdom was the first capital of Siam, the cradle of Thai civilization – the birthplace of Thai art, architecture and language.

Sukhothai is a solid bus ride between Bangkok and Chang Mai.  I suppose this is why it’s not so crowded, as it’s basically two days of travel there and back unless you fly.  But, oh it’s worth it, and we’re so happy we took the time to visit this mystical place.

The historical park has Khmer and Sri Lankan influences and dates from the Kingdom of Siam, mid 13th to late 14th century, considered by some Thailand’s golden era.  Some of the temples are over 700 hundred years old.  As an American, I think of this as ancient.

We spend the day within the old walls and moat, roaming the park, which has 21 historical sites and four serene ponds.  We climb up ruins, walk within high walls to gaze up at a Buddha towering above us in sublime equanimity.  The air smells green like grass.  We gaze into the water at the reflection, wondering which image is truly real.

Looking at the images upon the water reminds me of Plato’s flickering shadows on the cave wall.  I see the Buddha, palm trees, and temple reflected clearly on the water’s surface and am reminded of my own mind and perception, how the Buddha says we perceive conventional reality, yet not ultimate reality.  In other words, we mistake the shadows on the wall for actual existence.

Thailand makes you think of things like this.  What is the nature of reality?  What would it mean for our leaders to be shown meditating, awake in perfect wisdom?  How would it change a person to live surrounded by such models?

Rob and I spend a month in Thailand and I am at peace every single day.  A miracle, isn’t it?  Each day I wonder how long this happiness will last.  And it does, for our entire trip.  Something about Thailand puts me at ease in my own skin.  Maybe that’s what happiness is, being at peace with oneself.

After a day inside the park we explore outside the walls on our bikes.  There, alone in a field, we discover a temple encircled by giant carved elephants.  We bike on to see more temples but we can’t get to all 70 of them, so instead we head toward our hotel, past verdant fields, until we stop for Thai curry beside another peaceful pond alongside a field of green.

Sukhothai is peaceful, powerful, and lovely.  It seems a sleepy town yet the Buddhas are gloriously awake.  I wonder if it is always this quiet or if we somehow accidentally slipped into an alternate dimension of time?  It feels like a world removed.  A step away from the chaos of our times.  An oasis of calm.

I vow to return. And yet suddenly I understand–the ultimate journey is to find this peace within myself. Thailand is a good teacher.

The Sukhothai Historical Park is located in Northern Thailand, in the city Sukhothai, meaning literally the “Dawn of Happiness” – and is the one time capital of the first independent Kingdom of Thailand. This Kingdom is known for it’s pioneering achievements in Siamese (Thai) architecture, art, language, and hydraulic engineering. The park is declared as a World Heritage Site by UNESCO and the ancient ruins cover an area of approximately 70 square kilometers divided into five zones.

Sun After Dark by Pico Iyer