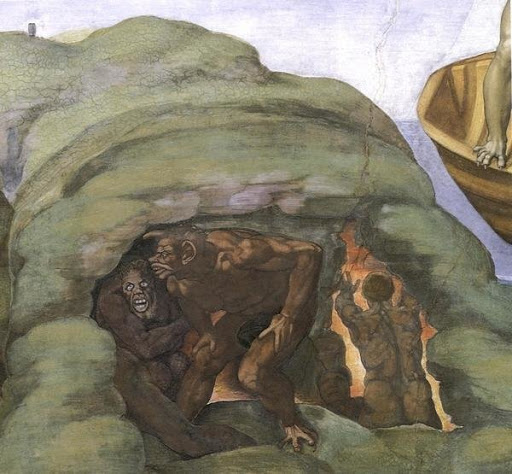 Imagine, as if in a dream, that you and some others are chained near the back of a cave, all virtual prisoners. You are facing the back wall of this cave, and because you are restricted in movement you can only see this wall. Behind you, light streams in from the mouth of the cave and projects onto this cave wall. Occasionally, people or animals walk by, projecting their shadow on the wall, but all you see, indeed all that you know, are their shadows, not the actual people or the animals themselves. You have spent your entire life this way, so to you what is “real” are only the shadows– abstract images of real objects.

Then imagine one day you are abruptly released from these chains. Suddenly, you turn toward the mouth of the cave, toward the light, which hits you bright and true as you emerge, and you are now abruptly exposed to this brand-new reality of the world. Imagine your shock upon realizing that the world you thought you knew was not the real world at all, but only a mere shadow of reality!

Many great thinkers from different lands and cultures have explored the concept that we do not see the true nature of the world nor our existence in it. However, a true philosopher’s highest goal is to understand and perceive a higher level of reality and to seek the truth always. We are all seekers to some degree, and as readers of HAFFLIGHT, my guess is that you desire more from life than the conventionally accepted and often mundane life path. Perhaps you have even opened your mind to perceive the world on a deeper level, as opposed to only seeing the surface of things.

Plato hints that the other members of the imprisoned cave dwellers do not desire to leave their prison, for this is the only world they have known, and for various reasons they wish to know no other. Perhaps, as in Dostoevsky’s famous passage from The Brothers Karamazov known as “The Grand Inquisitor,” many people are averse or even threatened by true freedom, and the burden that it can entail?

For Plato however, a true Philosopher never avoids reality, for truth always rises above simple belief and inevitably leads to the highest state of existence, which is wisdom.

“To them, the truth would be literally nothing more than the shadows of the images”
– Plato to Glaucon – The Republic – 375 BCE

Plato is considered to be the pivotal figure for Western Philosophical thought, and Socrates was his mentor and inspiration. Plato wrote in dialogue form, and most of what Plato wrote is preserved for us. It is somewhat impossible to definitively know where the ideas of Socrates end, and Plato’s begins, because Socrates did not write anything down, and therefore most of what we know of Socrates is mostly from Plato’s Dialogues, most of which feature Socrates as one of the main characters. The “Allegory of the Cave” is one of the most well-known and oft-repeated philosophical tales in the history of Philosophy