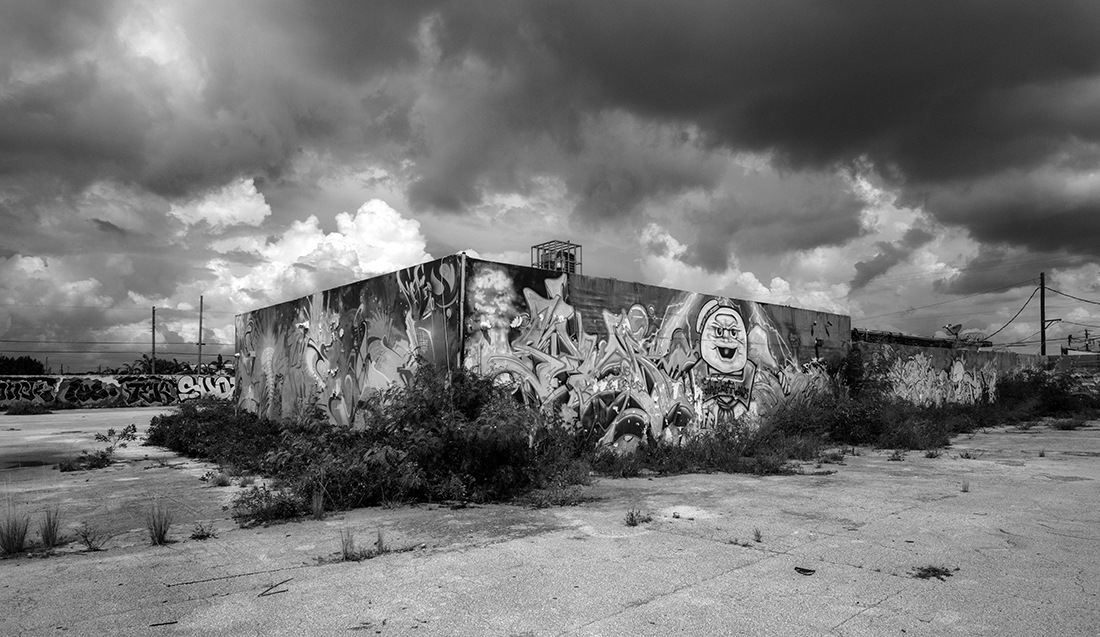 In 2003, I decided it was time to venture into an area of my hometown that I had never seen in all my years of living in Miami. The Wynwood neighborhood is directly adjacent to the glimmering skyscrapers, upscale shopping boutiques, and galleries of downtown Miami, but at that time almost nobody who didn’t actually live there ever strayed into it… at least on purpose. Economically depressed and forgotten, Wynwood was an area simply avoided by visitors and most Miami natives alike.

But at the time, something was starting to happen here — a renaissance of sorts fueled by the newly burgeoning street art phenomenon. As it turns out, Wynwood was the perfect place for street art; a neighborhood with street after street with flat, smooth walls originally built as factories and warehouses back in the early 1900’s when Wynwood was a thriving commercial and residential neighborhood.

So the word was out, and even though I had no idea if this would be some kind of photographic opportunity for me, I still had to see it. My main target was the old dilapidated Miami RC Cola Factory, abandoned and locked down since 1993. Supposedly the old complex had become the heart of the newly burgeoning Miami graffiti movement, a place for artists to practice and show their work, their “pieces”, to mostly other artists. Entering was easier said than done, and ultimately I had to crawl through a small hole I had found in one of the outer walls of the complex.

On this first visit, and much to my relief, I was the only one inside; and it was a virtual smorgasbord of graffiti.

On subsequent visits, I wasn’t alone, which I admit was sometimes a bit nerve-wracking. But they never had any problem with me being there, as long as I did not take any photos directly of their faces. Graffiti is still illegal in Dade County, a reality that gave the art its initial counter-culture edge, and which led most artists to choose to keep their real identities anonymous.

Over these years, Wynwood was being claimed by graffiti and street artists not only from Miami, but eventually from around the world.

I took my photographs at different time periods starting in 2002 up until about 2018. It’s been fascinating watching the constantly changing walls morph over the years. In the early years, I could see the graffiti artists’ work transform from simple graffiti into a more refined species of wall art. I still think some of the early graffiti was sublime due to its purity and its message — art simply for the sake of art. And it was good. I mean these guys were talented. They took graffiti to another level, and the world noticed. Many of them ended up making a lot of money from it, getting contract work on specific walls and buildings, and even some moving to canvases. Of course, this was sometimes scorned by other “purist” street artists. But why not? Should artists with work hanging in galleries only to be seen by those rich enough to buy it be the only ones who make money from their craft?

Wall art is ephemeral. Eventually, it all disappears under the paint of another work, and it is this aspect of the art, its impermanence, that helps make it so special.